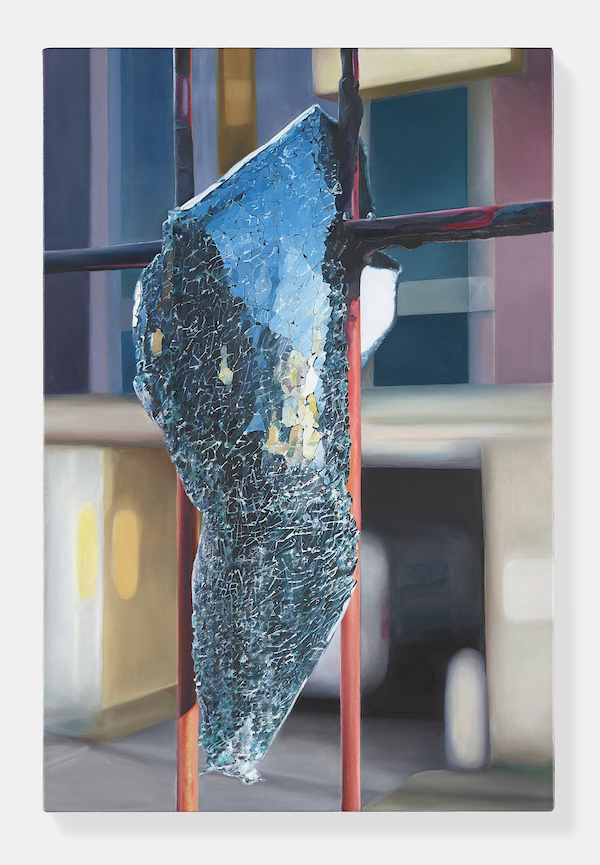 In Lyle Perkins’ first exhibition at Lychee one, he presents a series of recent paintings, which though varied in subject matter, all seem to frame everyday reality in an uncanny way. The compositions derive from photographs that are often reconfigured or retaken until the resulting image closes in on both the original fixation and the imminent painting. Many of the scenes are found during walks between home and studio, or in other prosaic moments. On encountering them, the structure of reality sometimes slips and things begin to obey a different kind of logic or be saturated in a kind of hyper-reality.

The manual translation of a photograph into a painting is clearly slower and more interpretive than its mechanical or digital reproduction and the resulting image can gain something useful from this ‘lossy’, analogue transfer. The longer you look at something, the stranger it can become. Details become gnarly. The analogy of making electronic music would not be irrelevant in Perkins’ case – where the intricacy of hardware circuits, patches, filters and their unruly interaction might conjure phantoms in the machine, as the artist pursues a detail upon which the whole composition could pivot. ‘The eye of the duck’, as David Lynch might call it. Which brings me to horses, a sea of printed blue horses spread across soft, white cotton jacket in cold light. In O.R.B. (2019), the galloping horses play freely across the canvas and whilst the close cropping removes all context, the glimpse of a child’s hand protruding from a sleeve and the punctuation of a button roots the picture back in reality. In a conversation I had with Perkins in his studio, he marveled at how unexpected strangeness in the world is routinely accepted by children and how adult consciousness also has the potential for hallucinatory interruptions, incidences where the ‘mad stuff’ just happens.

We know that a painting is not entirely what it represents and the things we think we see on its surface can often ‘flip’ to become other things (the Necker Cube being a simple optical example of this). The surface of a painting can also revert to being material, i.e. paint applied to canvas, or we may be drawn into a pure sensation of opticality. In relation to optics, Perkins is particularly interested in

the phenomenon of chromatic aberration, a feature of photography where different wavelengths of colour are refracted by different amounts as they pass through a lens, producing a kind of halo or colour offset, like very subtle Anaglyph 3D. Chromatic Aberration (2017-19) is also the title of one of the works in this exhibition. It is a study of a fragmented form, which looks like shattered glass held together by mirrored film. Draped in space, the shard hangs on what appears to be a red-oxidized metal framework set against a blurred apartment block, beyond the focal plane of the facetted mirrored form. The strangeness of this image calls to mind the unsettling colonisation of nature by crystalline structures in JG Ballard’s novel The Crystal World, or the suspension of earth-bound physical laws in the Strugatsky brothers’ Roadside Picnic (on which Tarkovsky’s film ‘Stalker’ is based).

In Reverse Whistler (2019), a red light infuses what appears to be (at least to my eyes) a phantasmagorical and other worldly landscape. The title also suggests a lot more than the mundane (if still poetic) reality of the actual source of the photograph. The resulting painting wouldn’t look out of place on the cover of a vintage science fiction novel, or illustrating a late 19th Century story that explores the romantic or alienating quality of a culture seen through colonial eyes.

Arvon (2019) depicts a sawn trunk tethered by a horizontal length of barbed wire that has grown and fused to the tree itself. The stump is in suspended animation and tightly cropped. The foregrounding of this ensemble gives license to the background of leaves and fence below which are more ‘abstract’, whilst remaining true to photographic reality. Vignetting is a feature in several of the works on show, where the term could be used in its photographic sense or in the traditional sense of the framing border around an image or text

Millfield (2016-2019) is local scene revisited in pursuit of its recording and painting. Dank cobbles recede in perspective towards a vibrant orange and green surface, reminiscent of oxidizing copper plate. The surface in question is actually an orange garage door with bright green algae growing in patches, in proximity to where rainwater splashes and gathers. This and other works speak of the entropy wrought by natural forces on man-made structures, even if the man-made structures seem to temporarily have the upper hand.

Southside (2018-19), named after the housing block where the photo was taken, depicts a stack of books illuminated by a naked light bulb. The low perspective and dramatic lighting lends an air of monumentality to the books, which begin to resemble a stone tor of angular, stacked blocks. The makeshift and spartan nature of the setting makes reference to a Van Gogh painting, ‘Pile of French Novels (1887) that triggered a reinvestigation of a photographic image Perkins had taken many years ago. The simplicity of this light source and still-life draws also a parallel to Gerhard Richter’s notion of ‘semblance’ or the human ability to perceive and understand what the camera can record through the process of painting – as in his ‘Two Candles’ (1982).

In the most recent work in the show, Roadside (2019), a vignette of foliage almost engulfs the painting. A partly obscured circular, moulded form in the centre draws our attention in. When the thing being painted is strange in the first place and we cannot investigate it through the normal means of familiarity, context or three-dimensional mobility, the accuracy of its representation is moot. For Perkins this clearly is a portrait although there is a struggle to understand such an alien object and its reason for being where it is. Knowing the source in reality of an image doesn’t necessarily undo our initial perception of it and we often have difficulty re-programming our involuntary first impressions, visual or emotional. It is these first visceral moments of experience that Perkins tries to sustain and intensify in these paintings.

Text by Sean Dower, a London based Artist who currently has an exhibition, Plunk, Boum, Krash, ZZZT at Laure Genillard Gallery until November 23rd, 2019. http://www.lglondon.org/

Born in Torquay Devon (1979) Perkins first showed his photography at the Tony Green gallery (1997) and assisted Toni Parks, daughter of Gordon Parks. He studied at Brighton University and performed his electronic music internationally under the moniker, Manfracture. Since the 2000s select exhibitions include: ‘HeLiBeBCNOFNeNaMgAISiPSCIArKCa’ Plough Yard gallery (2001), ‘Corpa-Nova’ Spital Square curated by Laurence Kavanagh (2003), ‘Trackers’ Pitshanger Manor, Ealing (2004), ‘Fresh Air Machine’, Calvert 22 Shoreditch, (2008), ‘TAG show’ Brown Gallery, Hoxton Square (2010). In 2012 he undertook a residency at RAID projects in LA and then had a two-person exhibition ‘The Age of Appropriation’ with John Summers at Studio 1:1 (2013) followed by a solo exhibition ‘Ease of Use’ at French Riviera, Bethnal Green (2015).