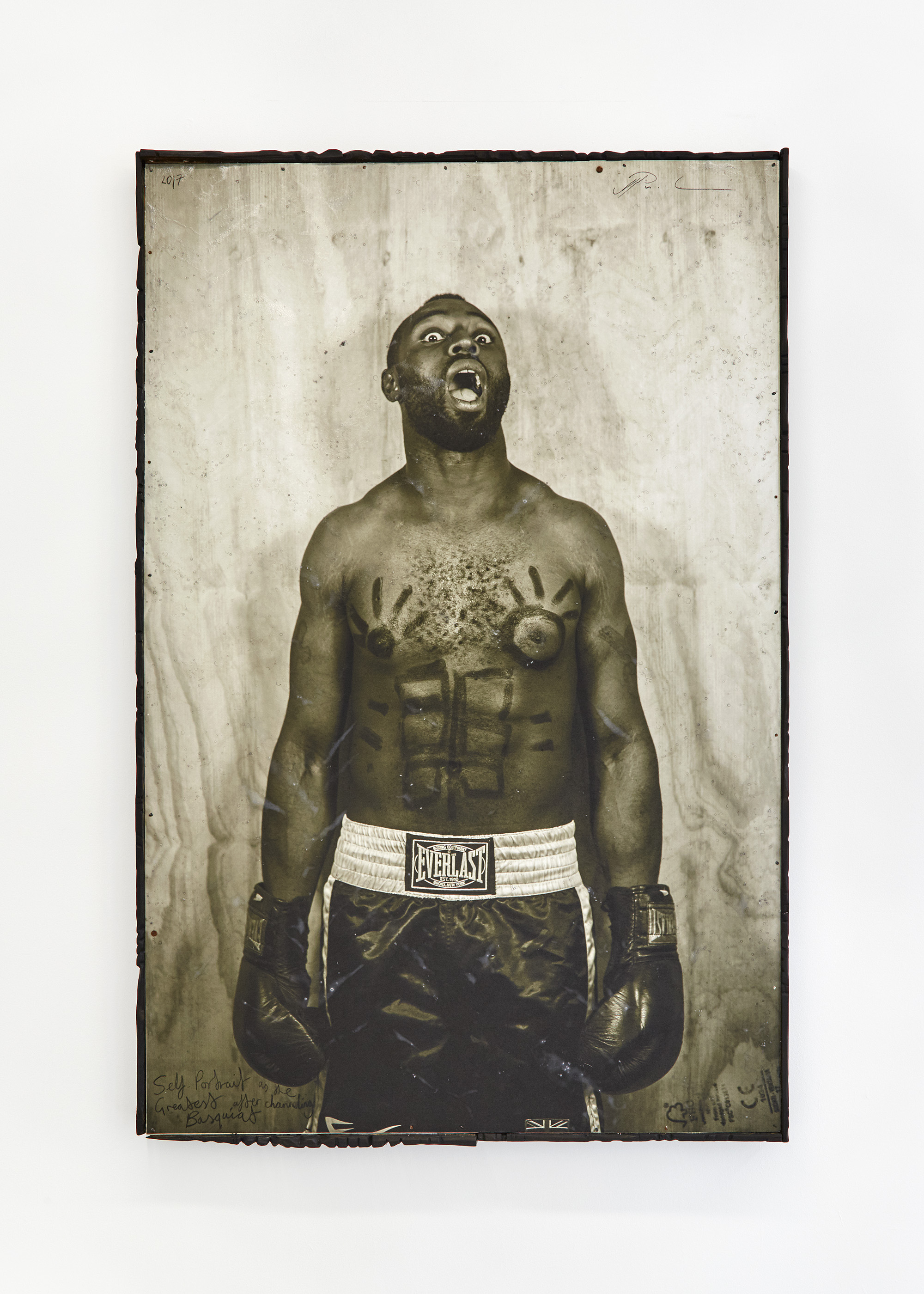 ‘Monsters cause trouble, they disturb definitions, they discombobulate what we think we mean. All of which is brave and wild, not to mention something like art’s task’.
– Charlie Fox from ‘This Young Monster’ (2017)

Young Monsters explores the multifariousness of masculinity today. In the present socio-political climate, the masculine experience is being questioned more than ever. At the same time, the once-fixed parameters of ‘traditional’ masculinity are being redrawn as binaries are broken and gender roles are blurred. In this exhibition, four artists question both the masculine and feminine attributes of the male body, their own as well as imagined fantastic monsters and prehistoric creatures. This multi-faceted approach to male subjectivity deconstructs gender norms and paves a new path to who can claim ownership of masculinity and whether humanity will fulfil what Donna Haraway calls ‘the utopian dream of the hope for a monstrous world without gender’.

As the feminist physicist Karen Barad postulates in her agential realism theory (2007), humans are not individually determinate with a fixed or given set of differences, but only materialise into individuals in ‘intra-actions’ or relations with each other and the environment. Therefore, gender needs no longer to be understood as an inherent attribute of the individual subject. In fact, the idea of a singular, fixed masculinity was rejected back in the late 1980s by a new sociology of masculinity led by sociologist Raewyn Connell who described a myriad of masculinities moulded by class, race, culture, sexuality and other factors, often battling against each other for authenticity. For Barad and Connell, there is no sense of fixity in terms of understanding masculinity and what human or species can exhibit these behavioural attributes that can vary dramatically across time and place.

The same is true of the artists in this exhibition.

British artist and ex-fashion designer Neil Haas interrogates the male gaze and masculinity through the lens of his own queer identity. Working in a multidisciplinary fashion, Haas makes images of men and teens taken from his archive of 1980’s and 90’s men’s magazines. Drawing and painting from the confines of his own bedroom and often on non-traditional materials such as found wood and slatted window blinds, the artist’s work has an introspective intimacy and vulnerability as Haas often grapples with understanding his place in the world as a gay man with a strong religious faith. For this show, Haas has made a new concrete figurative sculpture that recalls a modernist sculpture in its monumentality and pose but feels both fragile and erotic given the nature of its materiality and its split identity – equal parts Greek god, young man chillaxing after work or school and disfigured veteran. When recently asked by a journalist what masculinity means to him, Haas replied, ‘Strong masculine energy. Shifting and mysterious. Embracing and resisting definition’.

Irvin Pascal, a British artist of Nigerian/Dominican descent who pursued fine art after he completed a degree in architecture and a brief career as a professional boxer, makes artworks across the media of painting, sculpture and photography that explore the poetic abstraction of the body through the lens of black masculinity. For this exhibition, using a symbolic visual language and the materiality of his own body, Pascal’s mixed media photograph titled Self Portrait as the Greatest, after channeling Basquiat (2017) features the topless artist, mouth agape, fresh out of the boxing ring – complete with Everlast boxing shorts and gloves and branded on his bare chest with the familiar marks of Jean-Michel Basquiat, this other artist of colour from a different time and place. Referencing Basquait who started his career as a graffiti artist in New York in the late 1970s, Pascal, in effect, tags his own body like SAMO tagged the buildings of downtown Manhattan, likening his athletic body to the monumental skyscrapers built from iron and steel, the building blocks of America whose history is mired in tragedy and trauma for its African American populace. Another significant feature of this work is the artist’s use of his own hair as a material embedded in the varnish covering the photographic paper. By incorporating his own hair as a material that is produced abundantly and dispensed with voluntarily at the barbershop, Pascal attempts to counteract the economy of violence underlying the expenditure of resources inherent to all forms of industrial production. His considerations are guided by philosopher Hannah Arendt’s dissections of violence and power. Through this direct physical connection between the artist and his work, Pascal negotiates questions of identity, labour and materiality related to the black masculine body in the post-colonial Western world.

London-based British artist Glen Pudvine takes his nude self – complete with facial hair, musculature and erect penis – as the subject of his paintings, begging the question of whether narcissism or vulnerability drives this exploration. In the artist’s own words, ‘I don’t know where my vulnerability ends and my performance begins. What is actually being revealed about being a man, a human or a painter is a question I keep asking myself.’ These self-portraits often include interactions or exchanges with other species, such as dinosaurs, that subtly point to the desire for a monstrous transformation or expression of existential dread or what Charlie Fox calls ‘a strategy for abjuring a body that feels way too vulnerable or out of control’.

London-based American artist Gray Wielebinski explores gender and sexuality in their multidisciplinary art practice that uses collage across all media, from video and sculpture to sound and printmaking. In particular, Wielebinski’s artistic output looks at the intersections gender and sexuality have with other structures of power and identity, often examining the body through their own ambivalent relationship to masculinity. For this exhibition, Wielebinski fetishises the hyper-masculine body by reimagining it in a non-anthropocentric way, turning the artist’s collection of ‘camp’ textiles and Americana – fur, snakeskin, bandanas, Texan cowboy boots, baseball memorabilia – into fantastic and monstrous stuffed creatures that operate, in part, as self-portraits of the artist’s own trans body through the gaze of the cis-gendered viewer and beyond.

In this exhibition, toxic masculinity is pronounced dead as new masculinities are performed across the gender and racial spectrum with all of their often-unspoken vulnerabilities, idiosyncrasies and intersectional hybridities by these ‘brave’ and ‘wild’ artists (to quote Charlie Fox one last time).

Glen Pudvine (b. 1989, Chester, UK) lives and works in London where he graduated from the Royal Academy Schools in July 2019 after finishing his BA in Fine Art at Leeds Metropolitan University in 2011. His work was featured in several group exhibitions, including Premiums: Interim Projects 2018, Royal Academy of Arts, London (2018); New Contemporaries 2017, Block 336, London and Baltic Centre for Contemporary Art, Newcastle (2017-18); Addams Outtakes, Roaming Projects, London (2017); Something Like You, ANDOR, London (2017); Tired and Clever, Westminster Waste, London (2015); Every Emotion Under the Sun, Plaza Plaza, London (2015); and Tossed Salad and Scrambled Eggs (with Jesse Wine), Cactus Gallery, Liverpool (2015).

Gray Wielebinski (b. 1991, Dallas, Texas) is an artist working between London and Los Angeles who graduated from the Slade School of Fine Art with a Masters in Fine Art Media in 2018 and is currently an artist in residence at City & Guilds London Art School after finishing another residency in Portugal at Casa de Dona Laura funded by the Calouste Gulbenkian Foundation (2019) and in Hong Kong at the Academy of Visual Arts (2018). Recent solo exhibitions include those at Seager Gallery, London (curated by DATEAGLE ART) (2019); B.Dewitt Gallery, London travelling to Primary, Nottingham (2018); and Gazelli Art House, London (2018). With respect to group exhibitions, Wielebinski has recently exhibited with Gazelli Art House alongside Nan Goldin (2019) and in MOTHERS at Turf Projects, Croydon (2018). They have an upcoming exhibition at Organon in Odense, Denmark in September 2019.

Marcelle Joseph is a London-based American independent curator. In 2011, Joseph founded Marcelle Joseph Projects, a nomadic curatorial platform that has produced 36 exhibitions in the UK and the rest of Europe, featuring the work of over 175 international artists. Joseph’s expertise is in early career artists based in the UK, in particular, female-identifying and non-binary artists, and has an academic specialization in feminist art practice after completing an MA in Art History with Distinction from Birkbeck, University of London. In 2013, she executive edited Korean Art: The Power of Now (Thames & Hudson), a survey of the contemporary art scene in South Korea. Additionally, Joseph is a trustee of Matt’s Gallery, London and served on the jury of the 2017-2019 Max Mara Art Prize for Women, in collaboration with the Whitechapel Gallery and Collezione Maramotti, and the Mother Art Prize 2018. She also collects artworks by female-identifying artists under the collecting partnership, GIRLPOWER Collection, as well as more generally as part of the Marcelle Joseph Collection. Joseph is curating upcoming exhibitions at z2o Sara Zanin Gallery in Rome in January 2020.