Things That Happen When We Are Not Looking 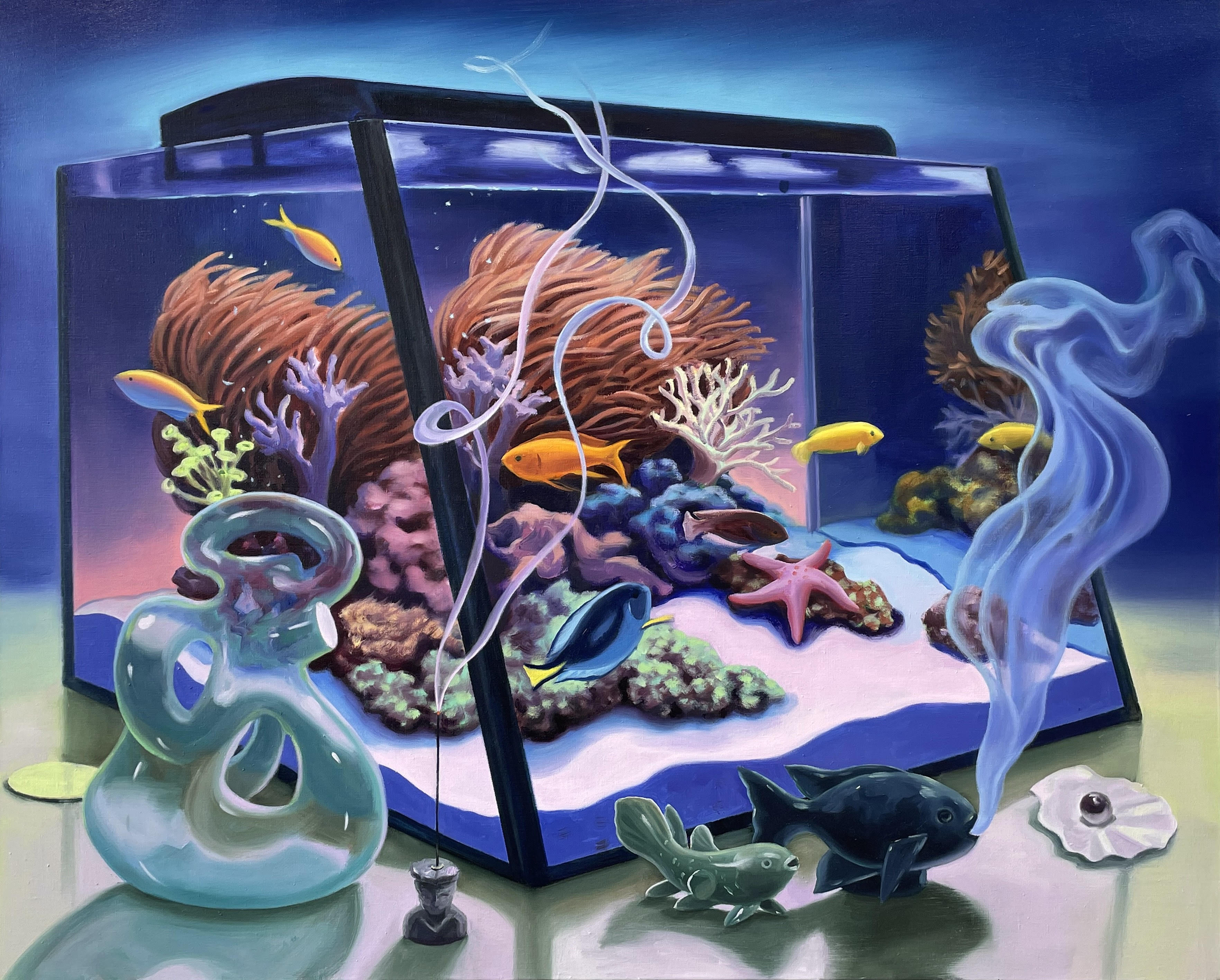 Minyoung Choi: Things That Happen When We Are Not Looking

The fish tank glowing in an empty room at night. The seabed passed over by the diver’s torch. The quiet beach after the holidaymakers have gone home. These are places full of liveliness and intentions – even when we’re not looking.

For her first solo show with Lychee One, Minyoung Choi presents a series of new paintings capturing underwater or seaside scenes inhabited by animals, fish, and a littering of manmade objects. The paintings offer momentary glimpses into the lives of other species, which are entangled with human existence but so often remain unseen by human eyes.

In one work, an octopus on the ocean floor raises a traditional Korean ceramic vessel, a relic of human culture that has made its way to the seabed just like the plastic triceratops and dolls house kitchen furniture. The octopus is lit from behind, as if by a diver’s lamp; implicitly, the diver gains a glimpse of the octopus’ back while the full scene in the painting is visible only to the viewer.

Choi’s reference to the octopus and its tentacular intelligence hints at alternative, nonhuman ways of interpreting the world. The evolution of human and octopus eyes diverged around 750 million years ago, and although they function in surprisingly similar ways, the eyes of the octopus are more adaptable, reliable, and energy efficient than ours. The painting is part of Choi’s investigation into types of perception, building on the exhibition’s thematic tension between looking and not looking, the discernible and the invisible.

In another painting, mops of silky hair cover the eyes of two dogs, their faces marked by their shining black noses. The dogs are guardian figures, emanating a sense of protection as they lie on the sand surrounded by more vulnerable tiny creatures. A sandcastle, perhaps abandoned by unseen human figures, sits perilously close to the lapping waves.

Choi’s paintings include several references to coelacanths, an endangered species of fish known as living fossils which evolved into their current form around 400 million years ago. The fish were thought by western scientists to have become extinct in the Late Cretaceous period until they were rediscovered in the 1930s. Coelacanths have existed out of human sight for thousands of years, carving out a marine existence that has only very recently become threatened by human pollution.

An image of a gleaming fish tank sits at the heart of the exhibition, evoking ideas of visibility and containment, living and artificial. Choi sees the fish tank as a metaphor for our contemporary relationship with the more-than-human world, and for how our anthropocentric viewpoint colours how we perceive “nature”. Many of the scenes in Things That Happen When We Are Not Looking occupy a liminal uncertain space, suggesting how both aquarium and ocean are shaped by the combined forces of human and nonhuman lives.

Imbued with a fleeting and faintly sinister sense of calm, Choi’s paintings capture traces of the passing of time, from the fossils of prehistory to the relics of contemporary petrochemical capitalism.

Minyoung Choi (b. Seoul, South Korea, 1989) is an artist who focuses primarily on oil painting. She graduated from an MFA Painting Course at the Slade School of Fine Art in 2017 and is currently living and working in London. She completed her BFA (2007 – 2010) and MFA (2011 – 2013) in Painting at Seoul National University in Seoul, South Korea before moving to London.

Choi’s works, which straddle the boundary between surrealism and real life representations, often function in relation to one another as a series of meditations on a particular theme or concept. Objects, images and patterns of light frequently recur among her paintings, creating a sense of cohesion, as if these pictures all belonged to the same dusky, strangely lit dream. Light is of utmost importance to Minyoung’s pictures, its various, radiating sources – moon, sunset, laptop screen, lamp – often providing the focal point of the composition.

Choi has been awarded numerous prizes among which the Next Generation Art Prize, part of the Wells Art Contemporary Award in 2018, the Henry Tonks Prize in 2017, the Slade Summer School Residency in 2017 and the Olvera Contemporary Arts Centre Residency in Olvera, Spain in 2017. She was a finalist of the RBA Rising Stars in 2019, the Gilchrist-Fisher Award in 2018 and the Chadwell Award in 2017. Choi’s works have recently been featured in The Economist: Creatures of the shallows-Minyoung Choi’s fish are symbols of confinement, 2021.