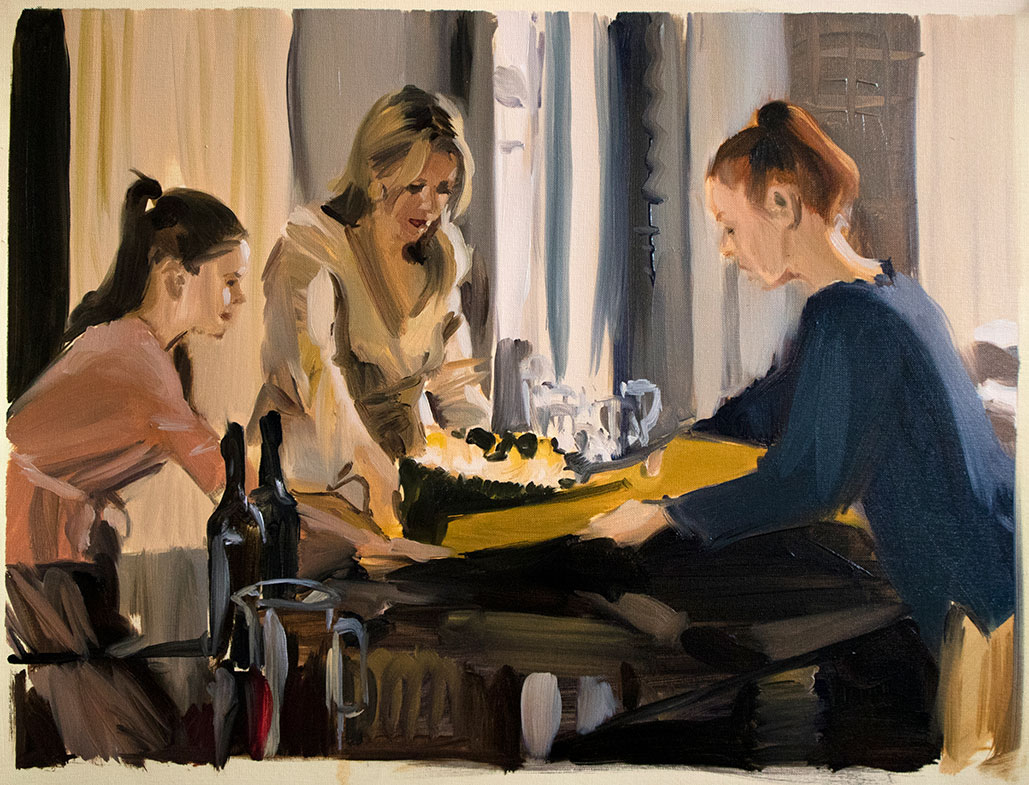 Something is happening but it is on the edge of this. This explains the tension between temporality and the image.

We might suppose the image and everything that follows from it. That it occurs is the mystery that any given painter might address. Simply speaking something opens that is discontinuous with reality hence the appearance of distance that contains an excess. This excess contains the secret of why the image escapes signification even to the point that almost nothing is indicated: a presence sliding into absence or the other way around. Detachment hovers close to this ambiguity that constitutes an invisible threshold.

Three table scenes follow and with it the accident of the conjunction. This might be described as an eruption of chance or if one where so inclined the working of unconscious trace.

There is a sense that something is missing whether this is something that cannot be seen, not matter of fact or is simply falling closer to apparition. A woman is staring at a lemon against the backdrop of sky and sea. A simple act really. Occasionally a subject might be prone to such a form of attention but is everything close to the appearance of such attention. Perhaps it is follows that we become locked into this attention to attention. A frozen moment touched by an obsessive reiteration of a time becoming trapped within itself as a presentation of a frozen solitude.

A table is being set with hands and eyes captured in motion. It is an in-between moment that normally simply slips by. The painting is rapid but this allows for oscillation between painterly gesture and the composition of the image. Memories of other images seep out of the surface of this impression establishing a frisson between what is happening, the anticipation of what comes next and the sense of memory upon which it rests. Immediacy and memory are being sliced by the act of painting.

Nothing is quite as it appears, the real never quite secured and the physics that predicates stability of occurrence beyond the grasp of habitual thinking. In this scene of average everydayness things are warping both space and time so that the contours of light trace the flood of imaginative anarchy. One moment the glazed white teapot is on the table, the next in multiple flights around the table: virtual processes that assume ascendency are stretching the reality principle. What is still and what it is that moves are related to the questions pertaining to how loops of information infiltrate the formation of the painterly image.

Three artists, three images: an invitation to think the strangeness of conjunction.