In collaboration with Joseph McGann, Tim Fok and Robbie Thompson 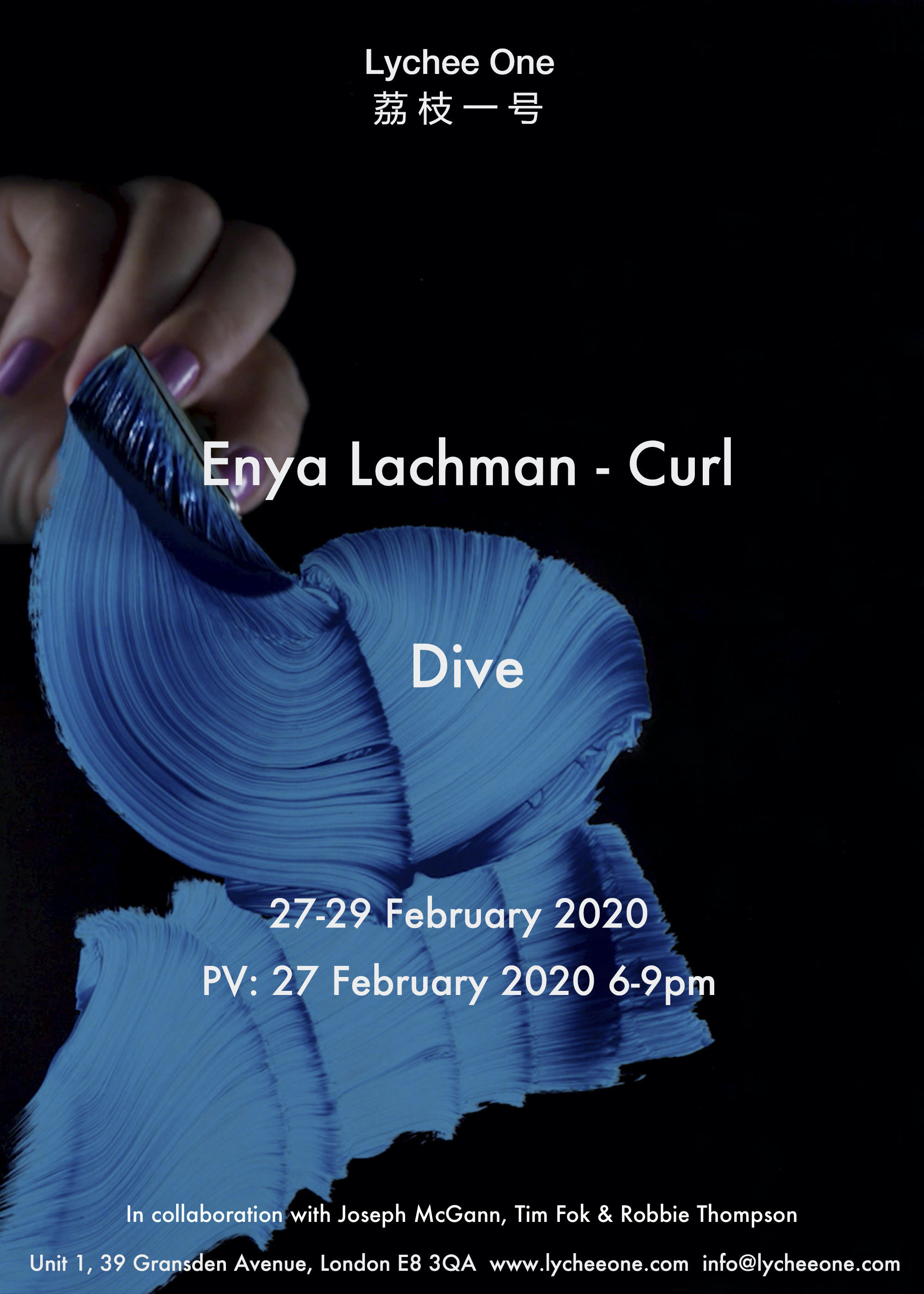 “The screen transformed into a kind of automatic painting…the initial image of a flower becomes a fish, which in turn becomes a hen, before being transformed into a human face and finally the head of a faun.” (Steven Jacobs ‘Framing Pictures’, 2012 on Picasso painting on glass in Paul Haesaerts’ film Visite à Picasso)

DIVE is a large-scale immersive audio-visual installation conceived by artist Enya Lachman-Curl, film maker Tim Fok, designer Robbie Thompson and composer Joseph McGann. Tim’s film captures Enya’s process as she applies cerulean blue oil paint onto a glass triptych: the camera faces the glass frontally, capturing her creative actions. Set in complete darkness, the visitor is invited to explore the film, projected onto three screens, with only the lights of Enya’s brushstrokes to guide them.

Paul Haesaerts was the first to film an artist painting on glass in 1950 in Visite à Picasso. In Jackson Pollock of 1951, Hans Namuth and Paul Falkenberg used the same practise to capture the physicality of Pollock’s expression and the dance of his paint across the surface, implying an important relationship between painting and the creative process. Notably, though not through glass, Jan Vrijman filmed Karel Appel through a hole in the canvas, showing the artist in a frenzied ‘creative’ state flicking paint onto his canvas to the music of Dizzy Gillespie. Filming from beneath the painters ‘glass canvas’ demonstrated the physicality of their practice and the viewer could become completely immersed in a painting. The act of painting is intrinsically performative, you can see each touch of a painter’s brush in the strokes on a canvas, however the final product often tends to be static. In DIVE Enya refers to this rich film history of documenting the act of painting through glass, but instead, turns the film of her process into the artwork itself. She creates an ‘automatic painting’ in motion.

Immersed in a cool cerulean blue and phosphorescent light, the viewer is enchanted by a tranquil and mesmeric painted reverie. Like holding water in her hands, Enya brushes fluid viscous oil paint onto panes of glass to capture the intangible. The strong saturated colour floods our visual field, its watery quality reflecting the transience of her medium. Not allowing for her paint to dry, she builds wet-in-wet onto the surface, constantly changing the direction of her brush. Once the panes of glass become fully covered with vivid patterns of colour, the viewers lose any trace of Enya’s hand; anthropomorphic forms appear and transform as if painted by a phantom. As she builds up this aquatic tripartite scape, Enya is accompanied by McGann’s instrumental composition, each chord responding to each mark, forming a complete sensory artwork – a digital Gesamtkunstwerk of music and paint.

These three glass panels make up three acts in her film playing simultaneously with three movements in a sonata. In tandem with the digital orchestra made up of many parts, each brush stroke heightens the visual strength of the triptych, reaching an ultimate visual and aural crescendo. Enya’s brushstrokes dance to the vibrant sounds of McGann’s music recalling the highly dynamic compositions of Pina Bausch. Pina’s Tanztheater Wuppertal dancers create paintings in motion using their long hair and silk coloured dresses as brushes. Throwing water and earth into the air, these elements stay still just for a moment on the stage before falling to the ground for the dancers to repeat their process. The dancers hold the stage captive as their canvas, mimicking a painter’s intense preoccupation with the surface before them.

Each movement washes away the trace of Enya’s previous stroke, leaving a path suspended momentarily in infinite darkness. Her marks are transformed from individual biomorphic impressions of flora and fauna into total colour fields. Her suspension of blue paint creates several layers of perspective; sounds and shapes constantly overlap until you can no longer distinguish where each brush stroke starts or ends. Lost in the musical and painterly velveteen gestures, we enter a trancelike state, forgetting whence we came and the constant spinning of the everyday pauses just for a moment. Each seductive lick of blue recalls latent memories and ignites our imagination. The atemporality of DIVE comes to a head with the final shot of Enya wiping the slate clean revealing her face again to the audience. Unlike the heavily expressive films of Picasso, Pollock and Appel at work, Enya’s serene manner of painting is magically captured through the glass lens. Turning the grand act of painting on its head, Enya denies her painted image any permanence and her process becomes the artwork itself. Visitors to DIVE are invited to submerge themselves completely in an enigmatic sensory environment – to enjoy a multidisciplinary contemplative experience of painterly touch and deep colour.