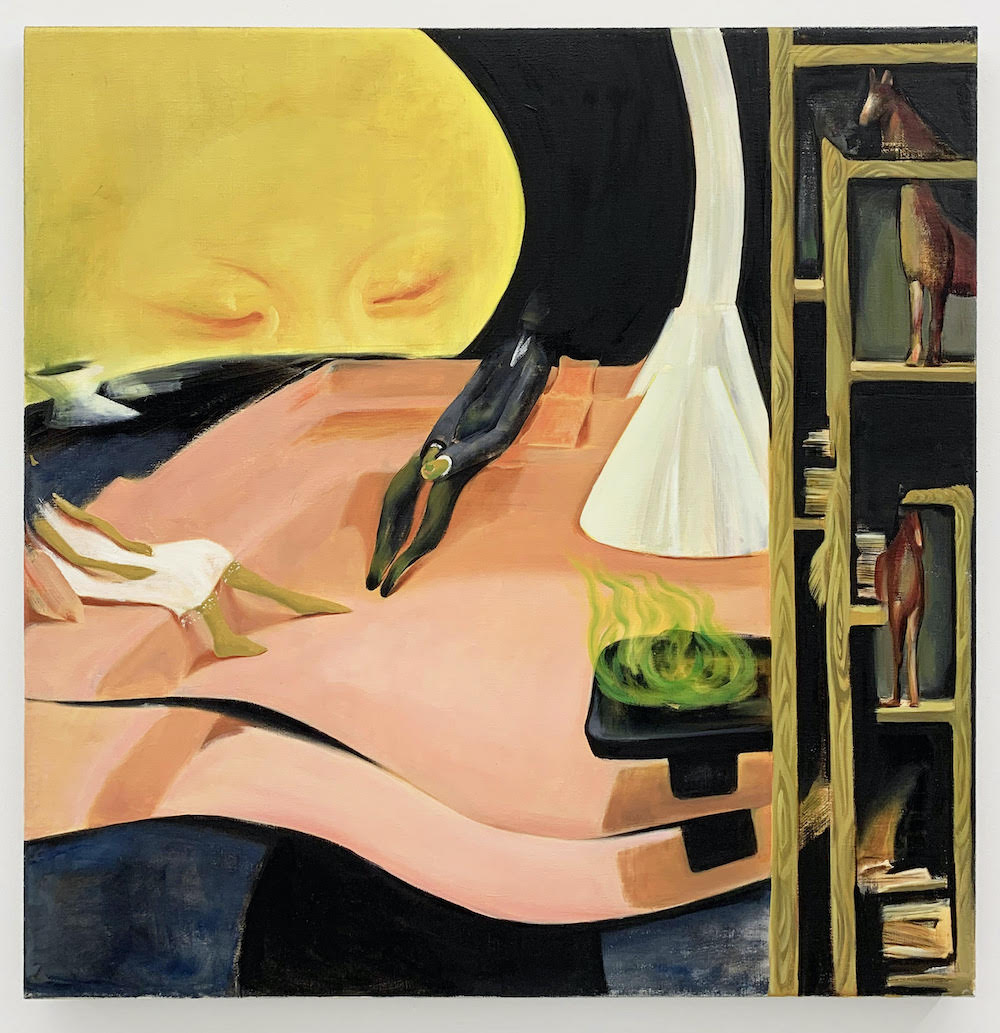 Rather than being introduced into a leaden sense of suspended time, we are instead invited to roam through a lost or yet to come labyrinth of temporalities. The dominate mood circulates around various modes of enchantment, as opposed to anxieties born out of late time. Attached to this circulation are registers related to virtual, childhood, mythic, and mystical spaces that all float free from the weight historical exactness. Following from this the tone of the paintings are light in ways that induce sensations related to reverie or imaginative drifting.

These paintings are born out of the last three months of ‘lock down’ in which other resources of living and absorption have to be invented. A counterintuitive response has been formed within this contraction of social space, a response that invites a multiplicity of optical attachments that pass over, through and before. All of this occurs without the process of objectification or fixed modes of identification manifesting as a constellation of images as opposed to a serialised progression.

Part of this difference between constellation and serialised progression is, or can be viewed as a relationship between fragmentation and detachment becoming re-inscribed into metamorphic patterns of becomings born out a belief in the world being composed out of a single substance. In this world all elements appear to reconnect with dispute realms in a series of fresh encounters mixing the realms of the vegetal, animal, insect, human, objects, elements, and gestures. Within this, there are the circulation of moods connected to the play of absorption and fascination in which detachment and abstract measure are abolished. The paintings themselves are sensual, even fleshy, inviting a touch-feel relationship as a way of being-with as surface encounter.

In many ways this marks a turning away from earlier work with its pre-occupations with the detached fragment, image appropriation, visual arrest, collage and layering. This indicates quite another perspective not only in regard to painting but more fundamentally the world in its passage from one schema to another. The question which is being posed within this shift relates to how the artist might make manifest this moment of both temporal register and schematic reconfiguration. Being thrown to the wind and finding a place within a remote order of things is to follow a gesture, a mode of gesture that finds its coherence within the multiplicity of folds of temporality and the image。